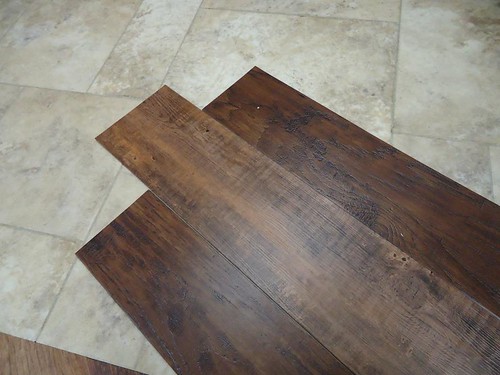 Photo by Carpets of Highwood / CC BY

flooring is quickly becoming the flooring of choice for homeowners, contractors, and more. Its remarkable durability, ease of installation, affordability, variety, and appearance make it a natural fit for anyone looking for a good floor in their homes.

But how forgiving is vinyl plank flooring? In other words, how strong, resilient, and reliable is it after it’s installed? Can it stand up to the punishment and rigors of a residence, or does it fall apart the minute a dog walks across the surface?

We’ll answer these questions (and a few more) in this blog. We’ll also explain the differences you can find among vinyl plank flooring and how those differences impact the flooring’s durability.

First, let’s discuss the different types of vinyl plank flooring that you can find.

Before we talk about the strength of plank flooring, it’s important to know that not all vinyl flooring is created equally. In a nutshell, there are three types of vinyl plank flooring:

Single-layer vinyl plank flooring is the most affordable and fragile. It can look good in a room, but it can also break under the strain of heavy loads or scratch from pet claws.

Multi-layer vinyl plank flooring is more reliable. As the name implies, it’s composed of multiple layers of different materials with thicker vinyl on top and additional structural layers underneath.

Finally, there’s waterproof vinyl flooring. This is the strongest, most resilient flooring because it’s layered with an additional, extra-thick layer of waterproofing underneath. This can also help insulate individual planks to help improve a home’s overall R value as well.

With that in mind, let’s evaluate these flooring types by how well they stand up to common household occurrences — scratches, dents, gouges, and cracking.

Scratching is one of the most common forms of damage against residential flooring, particularly with hardwood. But how does vinyl flooring stand up to scratches, like those you’d get from pets?

Single-layer vinyl flooring doesn’t do too well against scratches. It’s all too easy for pet claws, particularly large dogs, to scratch and scrape against the surface, creating irreparable damage. In this case, the damaged planks would have to be replaced every time they’re damaged.

Multi-layer vinyl flooring withstands scratches well. Because of the added strength underneath the surface, the top layer of each plank has less “give,” so it doesn’t scratch away like single-layer planks might.

Finally, waterproof vinyl flooring can withstand nearly any kind of scratch except those made with sharp blades. Pets and moving furniture will almost never scratch away at the surface layer.

Next, we have to consider dents. In vinyl plank flooring, “dents” are defined as any top-to-bottom imperfection that makes a plank unlevel. These dents can sometimes lead to pooling liquid, furniture sitting unevenly, and other minor nuisances that can worsen over time.

Single-layer planks are especially susceptible to dents. Heavy furniture, especially those with small feet, will almost certainly cause permanent dents in planks. Then, when you go to move the furniture, the dents will remain even when the furniture is gone. This is especially problematic in living rooms where furniture may be rearranged multiple times.

Multi-layer planks don’t have this issue except under exceptional duress. You need something that weighs several hundred (or thousand) pounds to cause a dent in the sandwich of powerful layers that these planks have.

Again, waterproof planks generally don’t have to worry about this. They’re so strong and reinforced from top-to-bottom that it’s hard to imagine anything in a conventional household that can cause permanent dent damage, even throughout multiple years.

How to remove dents from vinyl floors

Gouges are any deep, wide scratch that can permanently disfigure a plank. These are different from surface scratches in that gouges will actually dig up additional layers of plank, causing significant structural issues and possible cutting hazards in your floors.

Single-layer planks will probably gouge at some point in their use. This is because they’re made for light-duty use, similar to vinyl roll flooring, and scootching heavy furniture across the surface can make the plank fold, bunch, and gouge.

Multi-layer planks can also be susceptible to gouges by the nature of how gouges are defined. Typically, you’ll find that heavy items with small feet have the biggest potential to cut gouges. In multi-layer planks, gouges commonly happen after something heavy has already made a dent and someone tries to move the offending furniture. Unknown to the person doing the work, the furniture then drags against the dent, cutting a deep gouge in the plank.

Waterproof vinyl flooring is also in danger of gouging in the same way. If something extraordinarily heavy, sharp, or pointed makes a dent in a plank, then it becomes much easier to cut a gouge if the item is ever moved.

HOW TO REPAIR VINYL PLANK FLOORING

Last, cracking is defined as any spidering imperfection that weakens the structure of a plank as a whole. Cracks often happen through mishandling materials or sudden impacts from heavy items with sharp corners. This is because the natural tensile strength of vinyl makes it surprisingly hard to pierce, even when it’s in a single thin layer.

Still, single-layer vinyl flooring will likely crack under high weights, improper handling, or drops. These cracks are often single imperfections that move through a plank, but dropping an item can also cause a “spiderweb” effect that noticeably destroys the surface of a plank.

Multi-layer planks are much harder to crack because they’re designed to withstand all of these impacts. Multi-layer vinyl flooring is more forgiving when you handle it, it has a harder surface, and certain designs can even “give” under the weight of a drop to make the floor more of a cushion instead of a hard top.

Waterproof vinyl flooring is the same way. In fact, because of the soft waterproof layer underneath, it’s even harder to crack these planks than the other versions. In this regard, vinyl plank flooring is very forgiving. Good luck!