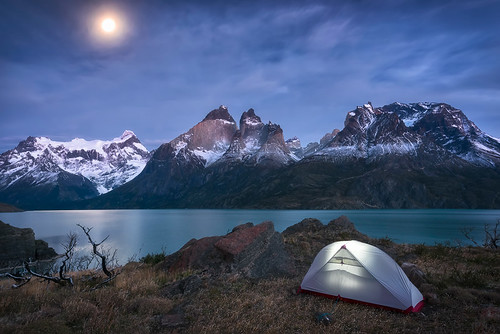 Photo by Paul Weeks / CC BY

tent for Patagonia is a must since backpacking and hiking there is the ultimate adventure. Patagonia one of the last unspoiled wilderness areas on the planet, and its beautiful scenery is irresistible.

There’s a reason that it’s an unspoiled wilderness, though: the weather can be extreme. It’s not uncommon to experience all four seasons in one day, which makes packing your gear a little tricky. Tents, in particular, can be a challenge.

You need one that’s light enough for backpacking, but tough enough to handle the extreme conditions. You’re going to need a quality four-season tent to handle the swings in weather, too. We’ve put together a short list of what we think are the right tents for use in Patagonia to help you decide which one is best for you.

These are our recommendations for the 4 best tents for Patagonia on the market: 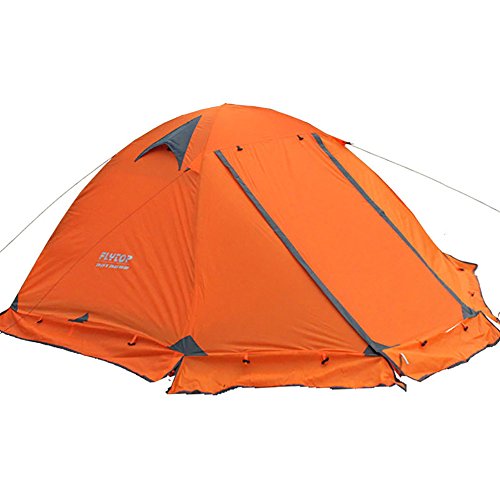 This’ll likely be the cheapest tent we put on this list (though price fluctuations do happen). Cheap does not mean low-quality, though. This is great tent for the money, and it’s well-suited to backpacking in rough conditions.

The whole thing weighs in at under five and a half pounds, so it’s easy to pack and carry. The frame is made of aircraft grade aluminum, so it doesn’t sacrifice any strength to achieve that low weight. It sets up quickly (in under five minutes) and it’ll keep the rain out even in the worst rainstorm.

It comes with a snowskirt, too. The rain fly extends out to provide a dry area outside the door of the tent so you have room to get your gear on before exposing yourself to the elements. That rain fly is windproof, too, not just waterproof. Users have consistently reported that this tent holds up extremely well and really lives up to the advertising claims. For a tent that costs what it does, that’s extremely unusual. For the money, this is one of the best tents for Patagonia period. 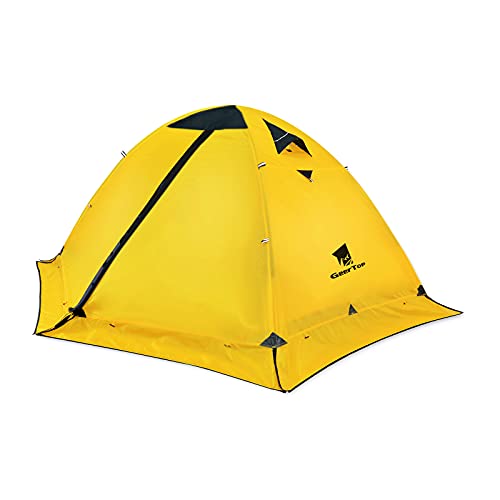 Although it’s slightly heavier than the Azarxis at 6.4 pounds, this GEERTOP is still a nice, light tent well-suited for backpacking in Patagonia. It’s a slightly larger tent, hence the extra weight (like the Azarxis, it can sleep 1-2, though two could be snug).

With the rain fly on, it’s water-and wind-proof (see full specs) with a snow skirt around the bottom to keep you dry and warm inside. With the fly off, it’s a well-ventilated, breezy tent suitable for warmer weather. Since it sleeps two adults, it has two doors—one on either side. That may seem like a minor feature, but if you’ve spent much time sharing a tent with another person, you know how nice it can be to have a second entryway so that you aren’t crawling over each other to get in and out.

The tent pegs are made of aluminum and the ropes have a reflective coating so you won’t trip over them in the dark. The aluminum tent poles and double stitched seams add to the strength and durability of the tent without adding much weight. 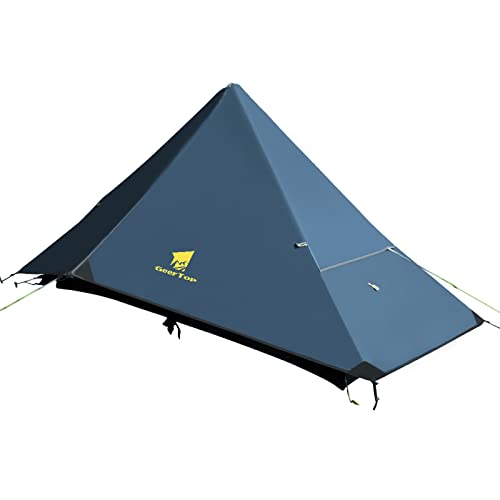 This tent has no poles, so it only weighs 2.9 pounds. That makes it a great backpacking tent. The catch is that it’s designed to use your trekking rods instead of tent poles, so if you don’t use those, this tent isn’t going to work for you.

If you do, though, this is a great little tent for a solo backpacker or someone who just prefers to have the tent all to themselves. The rain fly makes it waterproof, but if the weather is nice you can leave the fly off and have an incredibly breathable tent that will keep you cool in warm weather. The rain extends out from the tent to offer enough space for your to store your gear out of the elements. This is among the best tents for Patagonia, especially for folks concerned with the weight of their gear. 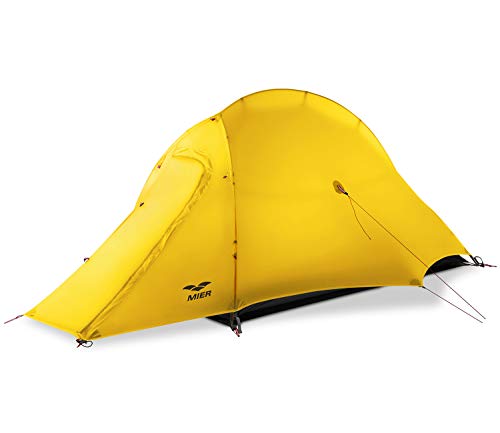 Another ultralight tent, weighing in at 2.6 pounds, this one manages to keep the weight down without losing the poles. It could be a bit pricey, but you don’t need to have a separate trekking pole to make it work. Like most ultralight tents, this tent only sleeps one adult, so don’t buy it if you’re wanting to share a tent with a partner.

It’s easy to set up and take down because of its use of clips instead of fabric loops (see full specs). The durable rain fly and bathtub floor make it rain and weather proof in all conditions. It has a built-in lantern hanger inside so you can easily see and wind down with a book after a long day of hiking, if that’s what you prefer. It’s a very narrow, one person tent, though, and some people may not like the tight space.

Any of these tents will serve you just fine on your trip. All of them are four season tents that are designed to stand up to all kinds of weather conditions, and none of them are heavy enough to be difficult to carry. The final two on the list are the smallest and weigh the least, but they’re also the two most expensive tents (though price fluctuations do happen). You’ll be most comfortable in all of these if you sleep alone in them, although some of them will fit and are designed for two adults to sleep in them.

Whichever tent you choose, bear in mind the overall weight of your gear and factor in the weight of the tent. A five pound tent is easier to carry with a lighter load, and a two pound tent might let you bring some other, heavier gear. It all depends on how much you want to spend on your tent and how heavy the rest of your gear is. With these ideas in mind, though, it shouldn’t be hard to find the best tent for Patagonian adventures on the horizon. Good luck!