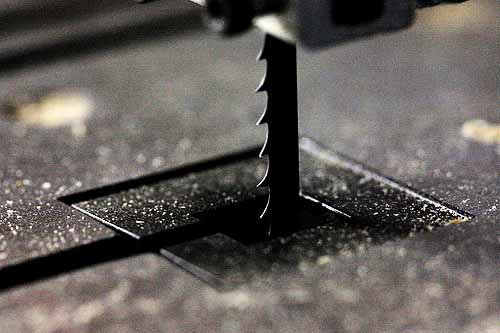 Photo by Kristy Johnson / CC BY

to find the best band saw under 500 bucks is often considered to be an exercise in futility. Thankfully, there’re a few products on the market which might be able to meet the needs of the home woodworker and not break the bank.

Most saws in this price range will be pretty small, or you may need to change the blade before you get any serious work done but it’s certainly not an impossible task. The main thing you’re looking for here is the price and if it’s durable enough to be more than an expensive toy.

Since time is precious, we’ll front-load our recommendations. Afterwards, if you have time, you can take a gander at our selection criteria and the differences between vertical and horizontal band saws (after our reviews). Sound good? (Disclaimer: Though these products usually are under $500, there are price fluctuations. The real, current price is the one found on the Amazon page.)

Here are our recommendations for the 4 best band saws under $500 on the market: 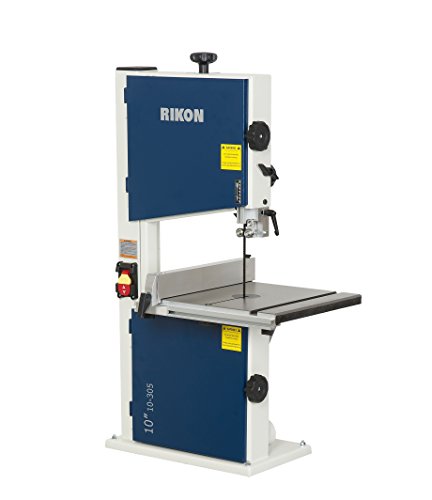 The Rikon 10-305 is one of the cheapest traditional bandsaws you’ll be able to find anywhere, and it has a rather impressive surface size of 13 ¾” by 12 ½” which is sure to work for most projects around the home. It (see full specs) comes with a stand as well if you want to use it without having to take up space on your bench.

Unfortunately, it’s only a direct on/off switch so it’s really only suitable for cutting wood, but it’s definitely the cheapest game in town and it’ll work pretty well for anything you might need to do around the home. 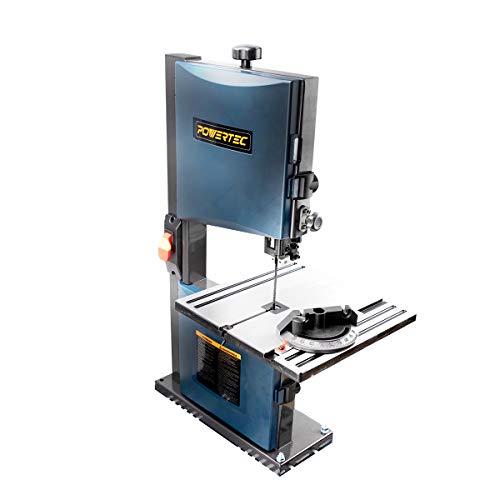 The Powertec BS9000 is a pretty solid choice for the money if you can get over the fact that much of the housing is made of plastic. It’s more suitable for lighter duty because of this, but if you take the time to bolt it to your bench or a base it’s definitely solid enough for nearly any hobby use.

It’s single speed and has a cutting surface of 11 ¾” by 11 ¾” which makes it good enough for art projects although you definitely won’t be replacing a table or chop saw with it anytime soon. The cutting area is 9” tall so you’ll be able to work with most timber as well. It’s a solid, entry-level band saw and easily one of the best band saws around. 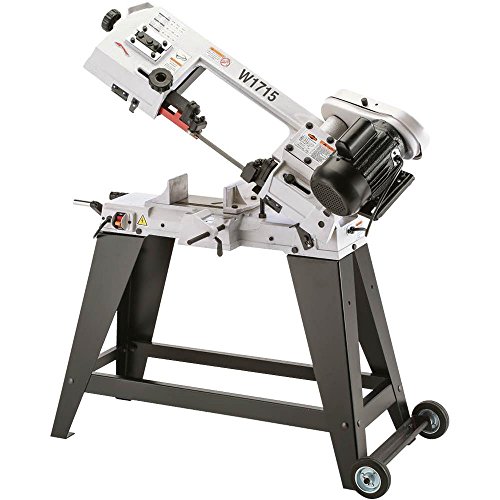 If you’re looking for something that will make short work of metal for your fabrication purposes in the shop, the Shop Fox W1715 is exactly what you’re looking for. It’s a horizontal/vertical saw designed to cut metal and comes with a blade suitable for a variety of materials.

It can operate at three different speeds, although it’s a bit slow for slicing wood. It’s perfect for the craftsman who wants to add cheap metal and plastic cutting capabilities to his tools on a budget, though.

This band saw uses 72” blades, and the whole unit can handle blades between 1/8” and 1/2” thick. It also comes with a three-in-one dust port at the bottom so you can use your current dust collection hose to get rid of sawdust, dirt, and other refuse. It even comes with a work light to show every detail when you want to make certain and deliberate cuts.

Which saw you decide to go with is definitely determined by what you plan on doing with it. Most of these sub-$500 saws run from 1/3hp to 1/2hp and if you want something beefier you’re going to spend more money. At this price point, however, a hobbyist will definitely be able to quickly receive more than their money’s value quite quickly.

If you’re planning on cutting more than just wood with your bandsaw, the only really respectable choice is one which has variable speeds. Plastics will burn if the saw runs too quickly and metals will completely ruin your blade if your saw is pushing too many feet/minute.

Make sure that you carefully consider how much space the saw has and what kind of projects you intend to complete with your new tool. If there’s not enough space to work with, then you’re pretty much out of luck. Most inexpensive saws will be more suitable for hobbyist and artistic uses rather than production runs of heavy materials, but you’ll find you can do a pretty surprising amount of work on a limited bench.

One of the best ways to go about figuring this out is to come up with a few projects that you’re intending to use and measure out the amount of materials you’ll need. Too wide is definitely a no-go, but with some precautions you can use considerably more length than is available on the table for some models, depending on how the saw blade is mounted.

Remember that horizontal saws are generally used for chopping metal, while vertical saws are generally regarded as being proper for wood. Most chopping and ripping involving wood is done with table saws and chop saws, as opposed to bandsaws which are used for detail work when it comes to dead trees. The FPM rating is your ultimate key here: slower saws are more suitable for metal while quicker ones can make short work of wood.

One other thing to keep in mind is where you plan on using the saw. A table model can be bolted to either a workbench or a sturdy piece of wood in order to make it easier to work with, but if you like working in your front yard you’ll want something with a stand. Stand saws can take up more floor space in your workshop, however. But a bench model will take up valuable space on the bench. You’ll need to decide where you can afford to put it.

In the end, it’s only recently that a wide number of hobbyist-level saws have become available at an affordable price and with the best band saws under 500 bucks, you’re sure to be able to make short work of tasks which would baffle you with any other tool.

What Are Bandsaws Used For?

Founder of Mechanicalcaveman.com, Beau is an unrepentant tool enthusiast and, sporting deadlift-callused hands and incongruously a beer belly, all-around macho guy.  When he doesn’t know re tools, he consults with his handyman and car-repairman buds to give you well-reasoned and cutting-edge info.