Photo by Tom Small / CC BY

batteries are a type of lithium ion battery that’s become quite popular in recent years. They are still used primarily for power vapes and flashlights as far as mainstream usage goes, but the market for them is spreading and specialized devices that use them are becoming more and more common all the time.

If you find yourself using them, you’ll also end up investing in a charger at some point and you’ll quickly realize that there’s a lot of variations between them that can make it quite hard to figure out which one you need for your power storage. There’s a few different factors that come into play when you’re looking into picking a charger out, but let’s take a look at 4 of the best 18650 battery chargers and then we can discuss how you can find the right one for your use.

The Nitecore i4 Intellicharge makes for one of the best chargers you can get, and comes in at a bargain price to boot. It’ll hold two batteries and get them charged for you quickly with LED indicator lights to let you know how far along things are. In addition to the 18650’s the expandable nature of the charger will allow you to charge an array of different batteries as well, making it quite useful to have around the house. 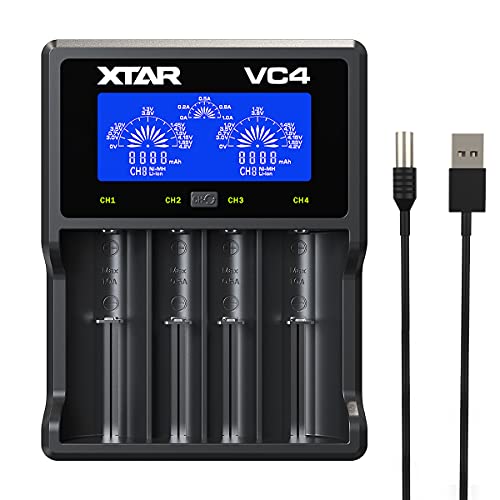 The XTAR VC4 costs quite a bit more than a lot of chargers for the same amount of batteries, but it comes in with a lot of nifty little features that aren’t obvious from a casual glance. Apart from the obvious difference, the LCD screen, the charger (see full specs) also comes in with a soft start which will avoid pumping high current into your battery right from the outset and will ramp up the charging through three different modes in order to prolong the life of your batteries. No ifs and buts: this is among the best 18650 battery chargers for you. 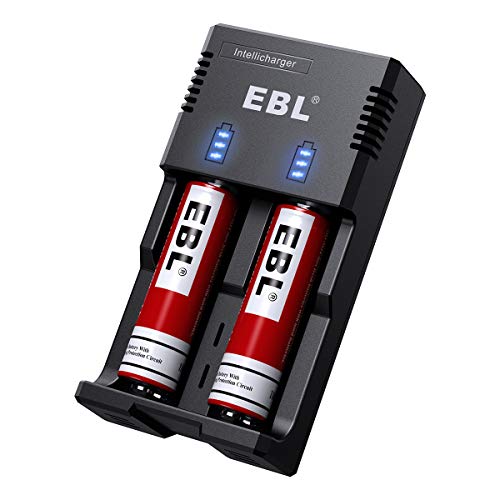 If you’re looking for a cheap charger that won’t burn your house down, the EBL has you covered. Well, it’s a bit more than that, it’s another intelligent charger that’ll run quickly and shut off once you’re charged and can charge a wide variety of different battery sizes. The main draw is definitely the low cost; however, it lacks some of the more advanced features of the others on this list. 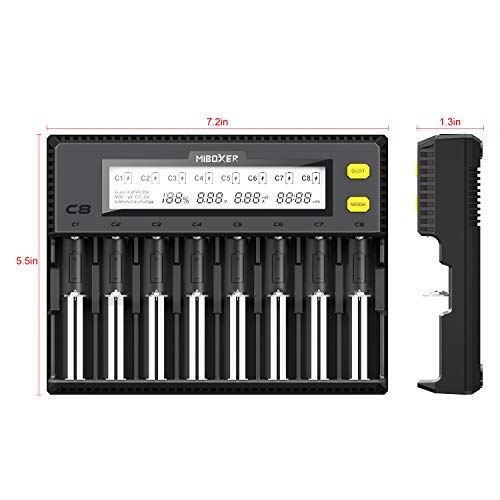 Some of us are more serious about our batteries than others and the Miboxer 18650 Battery Charger is definitely what you’re looking for at the end of the day when you go through a lot of charge and want to make sure that you get the best charge possible. The charger (see full specs) comes with an LCD that shows off the exact percentage the battery is charged, and it can charge just about anything. If you’re the type who finds themselves burning through batteries, this just might be the ticket for you.

Picking Out Your Battery Charger

You’ll find that not all products are equal when it comes to picking the best 18650 battery charger.

The most essential feature is a shut off once the battery is charged. This was the primary issue with lithium ion batteries being introduced to the masses, and as long as you have that going for you the risk of anything bad happening is lessened immensely.

Higher amp draw will mean that your batteries charge faster, Most of these chargers will be rated for .5A or 1.0A which is a considerable speed. The higher the better, to a certain extent, after a certain point you’ll find that the charger will get too hot, and that’s not good for your batteries. In general, you can trust pretty much any charger from a good brand.

After this comes the convenience features like indicators for the charge level in the battery and differing modes which can help to prolong the life of your batteries. The latter isn’t obvious to most of us, and can even slow down charging a little bit, but you’ll find that your batteries last for a lot more charges if you pick one of these.

The number of ports on the battery charger is up to personal preference. Someone who just charges their flashlight occasionally will need fewer ports than someone who vapes constantly in a high-powered box mod, for instance.

While using them is self-explanatory, there’s a couple of things you’ll need to be aware of.

The first is that the chargers are directional, while this is seemingly obvious, just make sure you get the batteries in the right way. If you don’t you risk fire and a battery discharge depending on the battery itself and the charger. While none of the ones we’ve recommended should put you at risk, it is something to be aware of if you decide to go with a truly cheap knock-off instead of a high-quality charger.

The other thing is to never leave your charger unattended. There’s a lot of innovations that have come about in safety and the more advanced the model the safer you’ll find it to be, but things can still happen quite quickly if one of the fail-safes doesn’t work properly. A refund for even an expensive charger isn’t going to do you much good if you torch your living room.

We’re not saying that using lithium batteries is dangerous, mind you, just that sometimes things can happen quite quickly and it’s always best to exercise a little bit of caution.

If you’re going to be regularly using lithium batteries, it’s a good idea to spend the extra money to get the best 18650 battery charger you can afford rather than screwing around with less advanced models. Even the expensive ones are quite cheap in the end, and the amount they’ll save you with soft starts and cyclic charging will make up for the extra batteries you’d have to buy within a year.